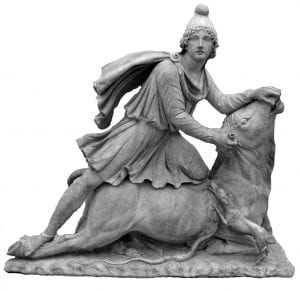 Some historians are perplexed by the similarities between traditional Christianity and Mithraism. One historian states, “There are striking coincidences with Christianity. Mithra was born in a cave on the 25th of December and was venerated on Sundays.” The truth is, there is no reason to be perplexed. As we have already discussed, it is no coincidence that a December 25th birthday and a Sunday observance were incorporated into Christianity. They are elements of a cleverly devised Satanic scheme to combine pagan sun worship with the worship of the Biblical Creator, Yeshua of Nazareth, Jesus Christ. The very same scheme is followed throughout the Old Testament-the combination of the worship of the sun god under the name Baal, with the true worship of the Creator.

Both Tertullian and Justin attempt to defend elements of their faith which were similar and sometimes exactly the same as Mithraic rituals. The first century Christian apologist Justin Martyr says that elements of Mithraism were actually derived from Christianity-that “wicked devils” had imitated Christianity. The problem is that many of those Mithraic precepts predate Christianity-by centuries.

While it is true that certain elements of Roman Mithraism were vaguely similar to legitimate Christian precepts such as baptism, and the belief in immortality, there is no way to defend customs that are directly associated with sun worship-customs that are directly associated with the worship of Baal, since Old Testament times.