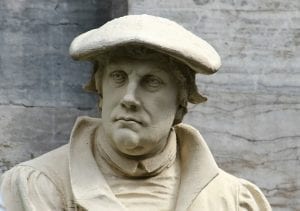 In the year 1517, the Protestant Reformation is known to have been initiated, when the German monk Martin Luther nailed his ninety five theses to the door of Wittenberg Church. It is commonly thought that the basis of the reformation was Sola Scriptura, or Scripture Only; the authority of scripture over that of church councils and the concept of Papal infallibility.

Today, while calling themselves Protestants, mainstream Christianity continues to adhere to pre-reformation church tradition that is in direct opposition to scripture. While reformation did occur in the 16th century; the proclamation of it, as being Sola Scriptura in nature, is misleading.

not heard of Luther, nailing his ninety five theses to the door of the church. Most have no idea what those theses addressed. They have been led to believe that the goal of Martin Luther’s reform was to separate from the Catholic Church; and to replace it with what is now recognized as Protestantism.
That is a Tall Tale of theology.

The rejection of Old Testament scripture by Martin Luther, the only scripture available to believers that walked and talked with Messiah, proves that the reformation of his day was not based on the Bible.
A direct quote from Luther makes that plain:

“We don’t want to see or hear Moses. How do you like that, my dear rebels? We say further, that all such Mosaic teachers deny the gospel, banish Christ, and annul the whole New Testament. I now speak as a Christian for Christians. For Moses is given to the Jewish people alone, and does not concern us Gentiles and Christians. We have our gospel and New Testament. If they can prove from them that images must be put away, we will gladly follow them. If they, however, through Moses would make us Jews, we will not endure it..”

“…Therefore Moses? legislation about images and the Sabbath, and what else goes beyond the natural law, since it is not supported by the natural law, is free, null and void, and is specifically given to the Jewish people alone.”

Near the end of his life, Martin Luther warned that those studying his work should: “read my earliest books very circumspectly” He goes on to explain:
“I too was a monk, and one of the right frantic and raving papists. When I took up this matter against Indulgences, I was so full and drunken, yea, so besotted in papal doctrine that, out of my great zeal, I would have been ready to do murder — at least, I would have been glad to see and help that murder should be done — on all who would not be obedient and subject to the pope, even to his smallest word.”

While Luther and others did achieve a certain degree of reformation, no reformation was necessary for the faithful remnant of his day: those who kept:
“the commandments of God and the faith of Jesus.”
Even though their names may not be recorded in history books, they are written in the “Lambs Book of Life.”