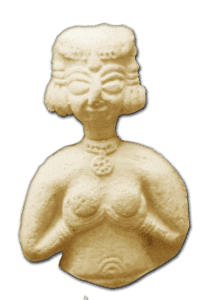 In 321, Constantine had decreed that Sunday would be a day of rest throughout the empire; and it was the decision of the Nicaean Council, over which he presided, that Passover would be observed on the first Sunday, after the full moon, on or after the vernal equinox. According to Biblical timing, Passover could fall on any day of the week. Based on the timing of the Council, man’s timing, Passover would always be observed on Sunday. Because of that, what is now recognized as Easter is often far from the actual time of Passover.

There is no indication that the early church celebrated Easter or a festival by any other similar name. The records of the Nicaean Council speak of Passover.  The truth is, the name Easter is actually derived from the name of a pagan fertility goddess.

Venerable Bede, a seventh century Anglo-Saxon theologian, tells us that the English word Easter is derived from the name of the pagan fertility goddess Eostra.  Eostra is associated with Astarte, or Ashtaroth, the goddess who was introduced into the British Isles by the Druids. Actually, Easter is just
another name for Beltis or Ishtar of the ancient Babylonians and can be traced all the way back to Hathor, the cow goddess of Egypt. It is important to
consider the fact that Hathor and Apis, the cow and bull gods of Egypt, were directly associated with the building of the golden calf at Mt. Sinai.

The respected Oxford English Dictionary informs us that the name Easter is derived from the name of a goddess whose festival was celebrated at the vernal equinox and that she was originally known as the dawn goddess-no doubt the origin of sunrise celebrations at the time of Easter.

According to Venerable Bede, who lived some six hundred years after the time of Christ, “The heathen Anglo Saxons called the fourth month ‘Esturmonath’ after their goddess ….Eostra.”17 One of the most important spring festivals among pre-Christian Germanic people was dedicated to the goddess Ostara or Eostra whose name suggests “east” and thus “dawn” and “morning light.” The name of the festival was transferred to the celebration of Christ’s resurrection
when Anglo-Saxon and German heathens converted to Christianity.

A quote from the University of Pittsburgh sums it up: “…English and Germanic Christians still attach the name of a heathen goddess to their most sacred holiday. The English and German words for ‘Easter’ derive from the name ‘Ostara,’ the Germanic goddess of springtime.”

Yes, it is common knowledge among historians and linguists that the word Easter is a translation of the name of a pagan sun goddess.